5 Best Miniature Gaming Kits To Do At Home These are the ominous words spoken by the War Operation Plan Response supercomputer, a.k.a. “Joshua,” in the 1983 film WarGames. And, while this was in reference to a computer game offer, the venerable role-playing game, or RPG, known as Dungeons & Dragons was almost a decade old already and taking the world by storm.

Most RPG games are based on game boards and various types of cards. Categories include role-play focused games that are carried out either around a table over a game board or live with gamers literally acting out their roles in a style known as live-action role-playing or LARP.

In addition, there is a category that is predominately centered around the cards themselves, commonly known as trading, or collectible, card games (CCGs) that mixes strategic deckbuilding elements with features of trading cards.

A popular role-playing game category is often referred to as miniature gaming or wargaming.

Wikipedia tells us that,

“In miniature wargaming, players enact simulated battles using scale models called miniature models, which can be anywhere from 2 mm to 54 mm in height, to represent warriors, vehicles, artillery, buildings, and terrain. These models are colloquially referred to as miniatures or minis.”

Today, miniature gaming kits and the games associated with them have taken the gaming world by storm.

One of the great aspects of this hobby is that it lends itself to being an activity done at home, which is a good thing in these days of self-quarantines and stay-at-home orders!

Watch a Video on Painting Miniatures! 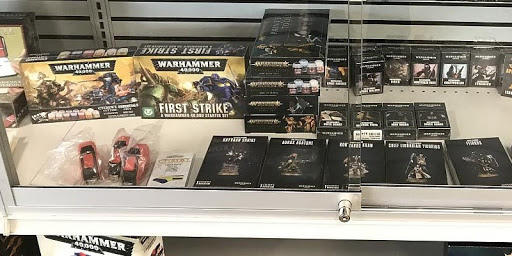 Warhammer 40,000 is the most popular miniature wargame in the world. The development of the setting began with the release of a game simply called ‘Warhammer’ in 1983, and the first edition of the rulebook was published in September 1987. The current edition of the was released in July 2020. Warhammer 40,000 is a table-top miniature-based wargame set in a dystopian future. The game is usually played by two players who can choose one of several factions from within the Warhammer 40,000 universe such as the Space Marines and Imperial Guard, the all-consuming Tyranids, the nearly extinct race of Eldar, or the once-human forces of Chaos.

Featuring stunningly detailed and painted miniatures, the X-Wing Miniatures Game has you engaged in exciting Star Wars space combat within several included scenarios. Once you select your crew and plan your maneuvers, your goal is to complete your mission! A tactical, ship-to-ship, combat game, X-Wing Miniatures lets players take control of rugged Rebel X-wings and evasive Imperial TIE fighters, while pitting them against each other in fast-paced space combat.

This game has you taking the role of fleet admiral with either the Rebel Alliance or the Imperial Navy. You assemble your fleet, engage the enemy, and – with a unique maneuvering tool – you guide your capital ships across the battlefield. As squadrons of starfighters swarm around them, the giant ships exchange fire, and your job is to issue the tactical commands that will decide the course of battle – and possibly the fate of the galaxy.

Star Wars: Legion is centered around the ground battles of the Galactic Civil War and features an army of miniatures composed of troopers, repulsor vehicles, and classic characters like Darth Vader or Luke Skywalker. A unique approach to the elements of command and control help to create the uncertainty and chaos of battle. And the miniatures provide the opportunity for assembly and painting so you can build a Star Wars army to lead into battle against the dreaded Galactic Empire or the upstart Rebel Alliance.

Eberron is a campaign setting for Dungeons & Dragons role-playing game. The game, commonly known as D&D, is set primarily on the continent of Khorvaire in the wake of a destructive war. Eberron is designed for traditional D&D elements and races, but in a different setting that combines the fantasy setting with dark adventure elements, and some non-traditional fantasy features such as trains, skyships, and mechanical beings that are powered by magic.

Collecting, painting, and game-playing with miniature gaming pieces is addictive and there is certainly a huge appeal despite of the plethora of video games that one could turn to instead.

“Miniature wargaming… requires quite a lot from the hobbyist. The buying and painting of minis, the learning of rules, the arranging of games and getting together somewhere to actually play your game of choice.

And yet, we do it. I think this is because there’s so much satisfaction in the hobby that simply can’t be replicated in a digital form. From manoeuvring that newly painted squad of warriors through those scratch-built ruins, to the direct social experience of you and your opponent playing out an immersive story on the tabletop in front of you.”